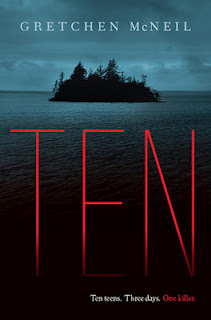 Shhhh!
Don't spread the word! Three-day weekend. House party.
White Rock House on Henry Island.
You do not want to miss it.
It was supposed to be the weekend of their lives—three days on Henry Island at an exclusive house party. Best friends Meg and Minnie each have their own reasons for wanting to be there, which involve their school's most eligible bachelor, T. J. Fletcher, and look forward to three glorious days of boys, bonding, and fun-filled luxury.
But what they expect is definitely not what they get, and what starts out as fun turns dark and twisted after the discovery of a DVD with a sinister message: Vengeance is mine.
Suddenly, people are dying, and with a storm raging outside, the teens are cut off from the rest of the world. No electricity, no phones, no Internet, and a ferry that isn't scheduled to return for three days. As the deaths become more violent and the teens turn on each other, can Meg find the killer before more people die? Or is the killer closer to her than she could ever imagine?

Ten......was just not my cup of tea. Since And Then There Were None was one of the only novels I enjoyed reading for school, I thought I would love this even more, since I would be able to connect better with teens rather then adults. Sadly, I was mistaken. Maybe if I didn't read And Then There Were None first, I might have enjoyed Ten more but I could just never get engrossed with the action. Even when people were dying, I was just skimming over the words. I couldn't relate to any of the characters either, the only character I even remotely liked was T.J.

However I did not see that ending coming! I tried to analyze and dissect every character to find out who the murderer was and I still didn't get it right! I have no doubt that there will be tons of people who will love this thriller, I just wasn't one of them.

An Advanced Readers Copy was provided by Goodreads First Reads for a honest and thoughtful review.

Email ThisBlogThis!Share to TwitterShare to FacebookShare to Pinterest
Labels: 2012, Contemporary, Mystery, Retelling, Thriller, Two and a Half Stars, Young Adult