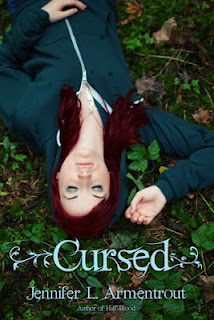 
Dying sucks--and high school senior Ember McWilliams knows firsthand. After a fatal car accident, her gifted little sister brought her back. Now anything Ember touches dies. And that, well, really blows.Ember operates on a no-touch policy with all living things--including boys. When Hayden Cromwell shows up, quoting Oscar Wilde and claiming her curse is a gift, she thinks he's a crazed cutie. But when he tells her he can help control it, she's more than interested. There's just one catch: Ember has to trust Hayden's adopted father, a man she's sure has sinister reasons for collecting children whose abilities even weird her out. However, she's willing to do anything to hold her sister's hand again. And hell, she'd also like to be able to kiss Hayden. Who wouldn't? But when Ember learns the accident that turned her into a freak may not've been an accident at all, she's not sure who to trust. Someone wanted her dead, and the closer she gets to the truth, the closer she is to losing not only her heart, but her life. For real this time.

I have to say that I'm disappointed with the outcome of Cursed. I've been an avid Jennifer Armentrout fan ever since I read her Lux and Covenant series, and when I saw that she was releasing a new novel, I was ecstatic! I've always loved the way that Jennifer can blend in a witty and kick ass heroine, fast moving and heart racing action, drop dead gorgeous love interests, and a hot steamy romance that makes you want to melt. That wasn't the case for Cursed.

The protagonist, Ember, wasn't who I was expecting her to be. I can't say that I hated her but I didn't love her either. Yes, there were many things that I admired about Ember, like her determination to take care of her sister and herself without any outside help. You can see right off the bat that Ember always thinks of her sister before anyone else and truly cares about her even when she's throwing a massive temper tantrum. Ember also has the funny inner dialogue that is present in Jennifer's other heroines, which I love! Those were probably the only things I liked about her. At other times in the novel, I found her submissive, weak, and sometimes even pathetic.

Someone with the touch of death, is a concept that isn't overused but isn't unique in the world of young adult books. Books like Shatter Me by Tahereh Mafi and Touch by Jus Accardo have the same ideas. I found the plot slow moving, since there wasn't as much action as I hoped for there to be. The villain was also to easy to spot and from there on most of the twists and turns were predictable.

I'm probably the only person who feels this way. I've heard nothing but amazing reviews on this, and I really wished I could've enjoyed it more. I won't be reading the sequel if she decides to make another one, but I will still be anxiously waiting for Deity and Opal to be released.

Heroine- 3/5
Romance- 3/5
It was a insta love, which annoyed the crap out of me. If you ignore that fact, then at times it was a pretty steamy and tense romance because of Ember's hands off policy.
Comedy- 4/5
Action- 2.5/5
Overall- 3/5


Click to Watch Book Trailer
Posted by Daphne at 10:52 AM