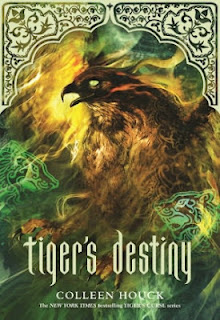 Order on Barnes and Noble.com:
Hardcover and Nook


With three of the goddess Durga's quests behind them, only one prophecy now stands in the way of Kelsey, Ren, and Kishan breaking the tiger's curse. But the trio's greatest challenge awaits them: A life-endangering pursuit in search of Durga's final gift, the Rope of Fire, on the Andaman Islands in the Bay of Bengal.


It's a race against time--and the evil sorcerer Lokesh--in this eagerly anticipated fourth volume in the bestselling Tiger's Curse series, which pits good against evil, tests the bonds of love and loyalty, and finally reveals the tigers' true destinies once and for all.
My Review:
Let me just start off by saying that I have been obsessed with the Tiger's Curse series ever since I cracked open the first book, and have been a Colleen Houck fan for even longer! I love the simple yet inspiring writing that Colleen uses, and the amazing talent she has with worldbuilding! In all four books, I felt like I was in the actual scene watching things play out before my very eyes. In books 1-3, every time Kelsey, the protagonist, was heartbroken, I felt it too and when she was deep into the adrenaline of battle, my heart was beating so fast that I could actually feel it pounding. That's a sign of a very amazing and experienced author!
After the first three heart wrenching, seat gripping, and tear spilling books, I had super super SUPER high expectations for this novel. Every time I read another one of her books, I always feared that I wouldn't like the next one as much because the previous novel was so spectacular. But I've been proved wrong over and over again (until now) because I liked every single novel more than the last, which I didn't even think was possible! Tiger's Curse may very well be my favorite novel, or at least one of my favourites, but it's definitely up there. Sadly, I was not as engrossed in Tiger's Destiny as I was in the previous three novels. Don't get me wrong, I still enjoyed it, but just not as much.
Kelsey, is one of my favorite heroines! In the previous novels, she has always been sweet, loving, pure, courageous, sacrificing, noble, powerful, and cunning! In Tiger's Destiny, she is all of these characteristics in most of the novel, but at other times I felt that she was a little bratty. This is the first time I've ever felt annoyed at Kelsey's character and I don't know if it was just me having a bad day or the way that certain scene was written. Kishan is much like himself in the previous novels. In Tiger's Voyage, it left off with Kishan and Kelsey dating, but even when she was his, Kishan still was jealous around Ren. Of course, his jealousies make sense, because even though Kelsey did love Kishan very much, you'd have to be blind to not see the connection that Ren and Kelsey have. Sometimes I just wished that Kishan would just wake up, move on in his life, and let Kelsey go. Ren, however is as perfect as always! He is the one character in this novel, that has never annoyed me or aggravated me in any way! He's definitely on my top book hotties list, and only second to Daemon from Jennifer Armentrout's best selling novel, Obsidian! Ren is swoonworthy and I almost melted into a puddle when he spoke about his love for Kelsey. He has always been sweet, considerate, and a thoughtful man. Even when Kelsey rejected him many MANY times, he still waited for her. The poems and songs he wrote for her were just the icing on the cake! I think I'm in love. *Swoons*
I have no doubt in my mind that alot of Colleen's fans are going to adore Tiger's Destiny even more than the first three novels. I really wish I did, but I just never got totally engrossed into it like I did with Tiger's Curse. Even though I wasn't head over heals about this novel, the Indian Mythology was still intriguing and I fell in love with the beautiful world that Colleen created. The final conclusion of this series, Tiger's Dream, will be released in 2013!
Heroine- 4.5/5
Romance- 5/5
Action- 5/5
Comedy- 4/5
Overall- 4/5
Posted by Daphne at 5:56 PM