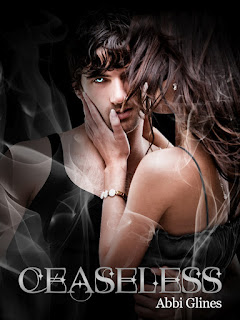 Order On Amazon: Kindle
Order On Barnes and Noble: Nook


Can he make her fall in love with him… again?

When Pagan Moore proved worthy of Death’s devotion, he was given the gift of getting to keep her.

But Dank was never promised that Pagan would keep him.

When a soul is created, so is its mate. In every lifetime those souls find each other. They complete the other’s destiny. It’s time for Pagan’s soul to choose if she truly wants an eternity at Death’s side or if she wants the mate created just for her.

Dank didn’t think he had to worry about her choice. He knew where her heart belonged. Until he realized that every kiss, every touch, every moment of their time together would be washed from her memories. He would have to win her heart all over again and prove to her soul that he was where she belonged.

If only her soul’s mate wasn’t right there standing in his way.

In this book, basically what happens is that The Deity, kind of like a god in this book, sees that Pagan and Dank (Aka Death) are in love with each other and want to spend the rest of eternity together. What neither of them anticipated was that Pagan's soul mate, is out there looking for her and wanting to find his "other half". Since Pagan knows alot more than any single soul has the right to know, The Deity believes that her choice would be biased and ends up taking away all of her memories of Dank and anything having to do with the spiritual/soul related world. This way, Dank doesn't have a unfair advantage over her soul mate, and Pagan can choose fairly. The question throughout the whole novel is. Can Dank get Pagan to fall in love with him again? Will she choose to live the rest of her days with Dank, the boy she swore her never ending love too? Or her soul mate, the soul that was designed specifically for her, and the one that she was destined to fall in love with over and over again, through every single one of her reincarnations?

After reading the summary of Ceaseless, I was expecting a book full of teenage angst, jealousy, and love triangles. Fortunately after reading it, I realized that Abbi took a different and unique approach to it, instead of following in Twilight's footsteps. Pagan, was a likable and strong character. She was loyal and protective of her best friend Miranda, and was there for her whenever she needed a shoulder to cry on. Pagan also had a funny inner commentary and her reactions were pretty realistic throughout the novel, even though there were a few parts that left me a bit skeptical. However, there were still times when Pagan said things that made me want to do a facepalm from how idiotic she sounded. Dank, was as sexy, brooding, and possessive as always. He had a tendency to go ballistic when Pagan came anywhere in the near vicinity to Jay, her soul mate, or if they touched in any way.

I enjoyed the romance thoroughly but I had to skip through some parts at the end because Pagan and Dank do have sex...and the author is a little too vivid with her words. I definitely was not expecting something so descriptive since her first two novels never veered that far off of the road.

There were a couple spelling errors in Ceaseless, not a huge amount but enough to catch your attention. I had to reread over a couple spots, because the words weren't grammatically correct or the spelling was just way off. I also felt that the ending was just a little bit too convenient and clean. It jumped from everything being a mess to all the puzzle pieces falling together perfectly, and that left me feeling like I just missed a huge portion of the story.

In conclusion, if you want to enjoy a easy read that includes a dark and broody bad boy, Ceaseless is the book for you. Just be warned that some scenes are not appropriate for younger readers.

Email ThisBlogThis!Share to TwitterShare to FacebookShare to Pinterest
Labels: 2012 Release, Paranormal, Romance, Three and a Half Stars, Young Adult