The Cadet of Tildor by Alex Lidell 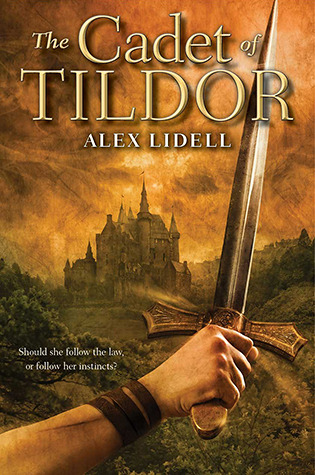 Order On Amazon: Hardcover
Kindle
Order on Barnes and Noble:
Hardcover and Nook

There is a new king on the throne of Tildor. Currents of political unrest sweep the country as two warring crime families seek power, angling to exploit the young Crown's inexperience. At the Academy of Tildor, the training ground for elite soldiers, Cadet Renee de Winter struggles to keep up with her male peers. But when her mentor, a notorious commander recalled from active duty to teach at the Academy, is kidnapped to fight in illegal gladiator games, Renee and her best friend Alec find themselves thrust into a world rife with crime, sorting through a maze of political intrigue, and struggling to resolve what they want, what is legal, and what is right.

It took me a while to finally open this book, because put quite frankly, the cover didn't interest me enough to take the time to research more about it. However, after seeing it in Barnes and Noble next to one of my favorite novels, The False Prince by Jennifer Nielsen, I decided to give it a shot and read the summary on the inside cover. After that, I was completely hooked. It sounded exactly like the type of book I would go for. A girl who never stopped fighting even when the task she faced seemed close to impossible. Yes please! So, I borrowed it from the library and cracked it open with high expectations.

The Cadet of Tildor....was what I was expecting.....as well as totally opposite from what I imagined it to be. There were so many pros and cons, however the one thing that stood out the most to me would be the emotion I was feeling during the whole novel. Confusion. It's not that I had a hard time understanding the words she used, because I did understand them, it's just the way she structured her sentences and switched the third person focus constantly. I was left with the, "What the heck" expression a countless number of times, which you can even ask my dad to confirm, because apparently, he thought I was having a aneurysm with all the weird faces I was making. xD

Some of the names were hard to remember as well, which in my opinion, is a big deal because it takes away from the enjoyment of the novel if you mess up on the names constantly or aren't even able to pronounce them at all. Renee was fine, but Savoy? For some reason, I kept mistaking the name Savoy as Savory throughout the whole novel...

However, despite the confusion this book wrecked on my mind, I found myself enjoying the main character, known as Renee. I admired the fact that she had the courage to stand up to her sorry excuse of a father and pack up her things and move out at the age of 16, knowing that if she went against her father's orders, she wouldn't have a home to return to. Unlike many YA novels, she wasn't some perfect protege who could kick anyone's ass just because she had a knack for it. She was equal to her peers when it came to skills in sword fighting, but since she was a girl, she didn't have as much muscle mass as them and therefore couldn't block their attacks with strength alone.

She struggles throughout her stay at the Academy and at many times stops believing it's even possible to reach her goal, which is a hopelessness we're all familiar with. This helped me connect with her character a whole lot better and created a depth that made her feel realistic. Renee grows as a person as the novel progresses, and she learns that not everything is as black and white as she always believed it to be.

I'm not exactly sure if Commander Savoy is a love interest or not since he's 23 to Renee's 16. When they first meet, Renee sort of hero worships him, which could also be easily mistaken as something more. A 7 year difference is a pretty big deal nowadays and the only book relationship that I know of with ages as far apart as this one is Rose and Dimitri from Vampire Academy. However, in that series, Rose is 18 years old which makes it a little bit better. But...since this story takes place in the olden days, I don't think that a 7 year difference at this age is taken as harshly as it is in society today.

Anyways, back to Savoy's character, although he's by far the most impressive sword fighter in the kingdom, he also has a lot of room for character improvement. In the beginning of the novel, we see him as a stuck up, egotistic jerk who doesn't have time for anyone other then himself and his Seventh. He scoffs at the idea of training students instead of fighting battles. However, throughout the novel we see a softer side of him that he rarely shows due to certain events that transpired in his past.

Alec really confused me. At first I found his character pretty likable and admired the fact that he always protected Renee and put her life before his own. And then all of a sudden........he became indifferent to her and all those years of friendship just went poof. It wasn't a gradual change or pulling away, but a abrupt stop that left me reeling.

There were a good amount of sword fights, but I could never imagine them or lose myself in their world as much as I had hoped. The descriptions and details never sucked me in, which left me a little disappointed. There was always something happening, either politically or physically, but nothing jumped out at me. No heart racing. No face fanning. Nada.

Overall, I both enjoyed and didn't enjoy The Cadet of Tildor. Don't get me wrong, Alex did a great job considering the fact that this was her debut novel, and she had a great theme as well as a great setting. However, the structuring of the novel left a lot to be desired. I had to constantly go back and forth, rereading chapters that I didn't understand. I would recommend this book to people who love reading "headstrong female characters who come out triumphant, against all odds" stories and books of the fantasy genre. Not completely sure if I'm going to read the sequel, but it's a possibility.