The Obsidian Mirror by Catherine Fisher 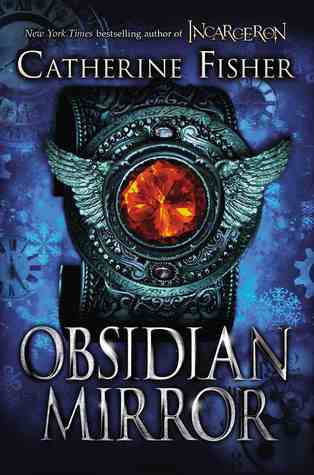 Jake's father disappears while working on mysterious experiments with the obsessive, reclusive Oberon Venn. Jake is convinced Venn has murdered him. But the truth he finds at the snow-bound Wintercombe Abbey is far stranger ... The experiments concerned a black mirror, which is a portal to both the past and the future. Venn is not alone in wanting to use its powers. Strangers begin gathering in and around Venn's estate: Sarah - a runaway, who appears out of nowhere and is clearly not what she says, Maskelyne - who claims the mirror was stolen from him in some past century. There are others, a product of the mirror's power to twist time. And a tribe of elemental beings surround this isolated estate, fey, cold, untrustworthy, and filled with hate for humans. But of them all, Jake is hell-bent on using the mirror to get to the truth. Whatever the cost, he must learn what really happened to his father.

Catherine Fisher is a pretty famous author, best known for her novel, Incarceron, which follows the story of a boy and his dashing escape from a futuristic prison that seems to take on a life of its own. Once upon a time, a long long time ago, I attempted reading it, and in result, became nothing but befuddled by her wacky characters and overwhelming plot. Back then, I blamed my utter confusion to my young age, but now, I'm not entirely sure that my reason was correct. Because even while reading The Obsidian Mirror at the age of sixteen, I had trouble understanding the message Catherine was trying to convey and what tone she wanted her characters to take on. This was, by far, the most confusing novel that I've ever read.

The premise was nothing short of fascinating, introducing innovative elements to the YA world such as time-traveling mirrors, Shee, Djinn, and Replicants of past people, or animals for that matter. Unfortunately, the author executed these intricate ideas very poorly, and I had no idea what she was trying to say the majority of the time. She threw way too many complicated ideas at you at once, not bothering to explain why or how they came to be, which in turn overwhelmed the reader and left you grasping at straws. In fact, if you asked me right now, I still wouldn't be able to explain to you what I just read.

The one thing that annoyed me the most was the writing style. I was fine, though nowhere near ecstatic, with the way Catherine strung sentences together. They flowed alright and never felt stilted or awkward, but I wasn't a fan of the constant changing of point of views. Although the story always stayed in third person, the author's focus switched between more than six characters with absolutey no warning preceding it. One paragraph could focus on Jake while the next one focused on his godfather, Oberon Venn. There were even a couple of cases where she switched point of views within a single paragraph, which only served to confuse me even more than I already was. At times, you only had the knowledge of the character being talked about and at others you had an omniscient point of view.

Since there really wasn't a main character, because the novel's focus jumped around so much, I'll just tell you my overall feel for all of them. They had no depth whatsoever. While the novel had a theme and writing style that even a freaking genius would have a difficult time understanding, the characters were two-dimensional and confined to their specific archetypes. None of them were even the slightest bit sympathetic to one another's goal throughout the whole length of the novel. Two in particular were ready to sacrifice the fate of the ENTIRE world, for one person, without a single feeling of remorse or regret. And the others? Didn't even seem to feel concerned about the coming apocalypse and did nothing to try and stop it, with the exception of one. I don't know about you, but I'm pretty sure this is NOT how a normal and realistic person would react in a situation like this. They all had one-track minds and would stop at nothing, no matter the cost, to achieve their ultimate goals.

There was always something happening to move the plot along, but for some reason, I always felt detached from it. As if I was watching myself read it on the sidelines. In the beginning, I was alright with the action, because I actually understood what was happening, but as the novel progressed, things became more and more confusing. And the more confusing the plot got, the less I felt invested in reading it.

Overall, this book had a super interesting premise, but unfortunately, it fell flat to me because of how poorly it was executed. The characters were all two-dimensional, had absolutely no depth, and apparently weren't capable of feeling sympathy. If you're a fan of Catherine's Incarceron series, you might enjoy this one more than I did, but if you aren't, I urge you to find something worth your time.

Email ThisBlogThis!Share to TwitterShare to FacebookShare to Pinterest
Labels: 2013 Release, Two and a Half Stars, Young Adult