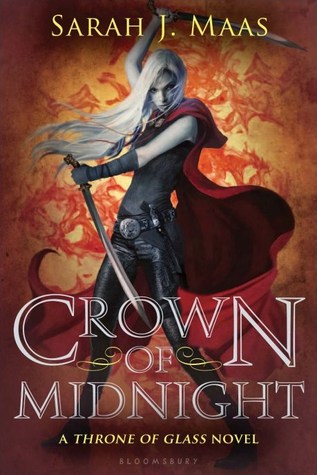 
An assassin’s loyalties are always in doubt.
But her heart never wavers.

After a year of hard labor in the Salt Mines of Endovier, eighteen-year-old assassin Celaena Sardothien has won the king's contest to become the new royal assassin. Yet Celaena is far from loyal to the crown – a secret she hides from even her most intimate confidantes.

Keeping up the deadly charade—while pretending to do the king's bidding—will test her in frightening new ways, especially when she's given a task that could jeopardize everything she's come to care for. And there are far more dangerous forces gathering on the horizon -- forces that threaten to destroy her entire world, and will surely force Celaena to make a choice.


Where do the assassin’s loyalties lie, and who is she most willing to fight for?

I read Crown of Midnight quite a while ago and decided to put off the review until we were closer to the release date. Unfortunately, since all this time has passed, I've forgotten some of the details. Suffice to say, I won't be waiting this long to write a review ever again. xD However, even after all this time, Crown of Midnight still holds a candle above all the other novels I've read this year, even surpassing Siege and Storm, a book that I wrote a nearly hysterical review on earlier in the year. For some reason, when I first read Throne of Glass, I marked it off as an alright read...nothing special or even close to remarkable. But after reading it over again, my views have definitely changed, kind of the same case that Angelfall by Susan Ee was for me. Since I loved Throne of Glass oh so much and reread it over and over again like a bajillion times, I had super high expectations for it's sequel. I was ecstatic when it didn't suffer from "second book syndrome" like many trilogies do nowadays and that it went above and beyond my original expectations.

In this novel, Celaena Sardothien was as bad-ass as ever. She knows how to fend for herself and hates it when she has to rely on others for support. She is, by far, the most independent and fierce heroine I've ever had the pleasure of reading about. However, even though she's definitely more courageous and brave than most, she still has her weaknesses. For one thing, she still hasn't gotten over her arrogance, although some light is shined on why she's so confident of herself to begin with. And even though she has a fierce, no BS, mess-with-me-and-I'll-slit-your-throat sort of persona, she's still as vulnerable as any other girl when it comes to matters of the heart. And Holy Crap, the secret that's revealed about her? Mind-Blown. I had speculated about it and even guessed it near the beginning, but immediately wrote it off as impossible, something I shouldn't have been so quick to do.

The romance was a bit confusing. If you've been keeping up with this series, you'd know that there are two love interests, Dorian, the prince and current heir to the throne, and Chaol, the head of the Guard. From the beginning I knew who I wanted her to pick and had no doubt as to who it would be, but now? Not so sure. Dorian....he's growing on me a bit. He's gone through a lot of character development, and although he's still a bit dependent on others to protect him, he's grown a backbone, can stand up for himself, and fights for what he believes in. With Dorian growing up before our very eyes and after what transpired between Chaol and Celaena, I'm not too sure which direction the last installment is going to take. Heck, I'm not even too sure if I know which side I'm on anymore.

This novel never had a dull moment! Every page was filled to the brim with nail-biting and seat-clinging suspense. The action scenes were marvelously written and I felt as if I was watching everything unfold before my very eyes. I was constantly gasping at every little detail and awed by all the amazing secrets that were revealed. We get a lot more history and world building in this one, something that was definitely needed and beautifully done.

Overall, Crown of Midnight definitely did not disappoint or suffer from "second book syndrome." If you came up to me today and asked me whether I liked this novel or it's predecessor better....I would say sort of. Both novels are amazing, but in there own special ways. I wouldn't be able to choose between them. If you've already read Throne of Glass and loved it, this is definitely one book you do NOT want to miss. If you haven't heard of this series yet or have been putting it off for a later date, STOP PROCRASTINATING AND START THIS SERIES NOW!


*An ARC was provided by Netgalley in exchange for an honest and thoughtful review.

Cover- 3/5
Not really into this new cover scheme.


Click to Watch Book Trailer
Posted by Daphne at 9:36 AM