A Castle of Sand by Bella Forrest 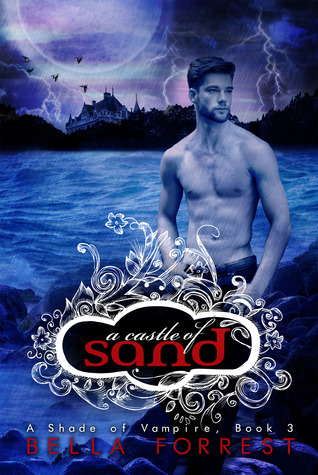 
No synopsis is available at this time.

I wanted to enjoy this more, I really did, but unfortunately, my wants were left unrequited. Part of the reason was because I just wasn't in the mood for a book solely focused on the romance, which was my fault entirely. I ignored the little voice in my head that told me to wait just a little bit longer to open the novel, and became disappointed because of it. The other reason was because the protagonist, Sofia, just seemed to continuously annoy me throughout the second half of the novel. If you know me at all, you would know that characters, especially important ones, either make it or break it for me. In my opinion, there the most important piece of a story, and if I find them lacking, then I know, without a doubt, that I won't be able to enjoy the rest of the book, no matter how interesting the premise or writing may be.

I liked Sofia as a character for the first half of the book. She was compassionate, loving, and always put others before herself. In addition to that, she was also the only person who would ever stand up to Derek, even when his humanity switch was flipped, and actually get out of the situation more or less unscathed. That's what I admired about her most, she wasn't afraid to voice her opinions, even if it meant risking her life because of it.

However, once I reached the midpoint line, I started getting annoyed with her. She often forgot how much pressure was on Derek's shoulders and expected him to do something about a problem immediately, despite the fact that even she couldn't think of a better alternative, one that was feasible anyways. And then she took on the tone of a damsel in distress, always waiting for her brave knight to swoop in and save the day. I know that she probably couldn't have done much against a vampire, considering their strength and speed, but she could've at least tried to learn and defend herself. I'd rather see her try to devise an escape plan or attempt to fight back instead of constantly break down in tears or beg the villain to let her go. If the human hunters were able to learn how to not only defend themselves, but hunt vamps as well, I'm pretty sure that Sofia should be able to learn basic defense.

As you all know, I'm not a huge fan of romance by itself. Even though the past two installments were romance-driven, I enjoyed them, because they were still pretty fast paced. However, for some reason, I just couldn't get into this one. I felt detached and removed from the plot, and I couldn't seem to get interested enough to care about what happened. The action was slow, and I found myself skipping pages more than once. However, if you're more interested in the romance aspect than the action aspect, you'll probably find this book much more fascinating than I did.

I didn't have any issues with the writing style. If you've read Bella's last few books, you would know that she usually writes a novel in multiple POVs, as she does in A Castle of Sand. Although this isn't a easy feat to accomplish, Bella transitioned from character to character flawlessly. In this book, we see through the eyes of Sofia, Derek, Ben, and Lucas, although the latter two were seen less often. There were a few places where things were a bit confusing or could've used more explaining, but those times were few and in between.

Overall, I didn't enjoy A Castle of Sand as much as I hoped I would. This installment was based more on the romance than anything else, and although it was undoubtedly well written, I just couldn't bring myself to care. The pacing dragged for me, and I found myself skipping pages more often than not. The writing style was more or less the same, with constant switches in POVs that transitioned perfectly. Even though this wasn't my cup of tea, I would recommend this novel to people who are more interested in a romance-driven plot than an action-driven one. I have no doubt that A Castle of Sand will get some really high ratings, unfortunately, I just wasn't in the mood for it at the moment.

*An ARC was provided by the author
in exchange for an honest and thoughtful review.