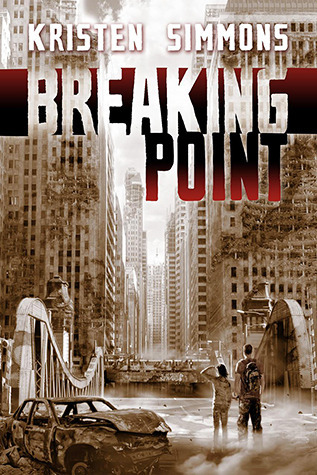 After faking their deaths to escape from prison, Ember Miller and Chase Jennings have only one goal: to lay low until the Federal Bureau of Reformation forgets they ever existed.

Near-celebrities now for the increasingly sensationalized tales of their struggles with the government, Ember and Chase are recognized and taken in by the Resistance—an underground organization working to systematically take down the government. At headquarters, all eyes are on the sniper, an anonymous assassin taking out FBR soldiers one by one. Rumors are flying about the sniper’s true identity, and Ember and Chase welcome the diversion….

Until the government posts its most-wanted list, and their number one suspect is Ember herself.

Orders are shoot to kill, and soldiers are cleared to fire on suspicion alone. Suddenly Ember can’t even step onto the street without fear of being recognized, and “laying low” is a joke. Even members of the Resistance are starting to look at her sideways.

With Chase urging her to run, Ember must decide: Go into hiding…or fight back?

Breaking Point had so much potential! It breaks my heart to see a novel, written by such an obviously talented author, go to waste solely because of one poorly executed character. Even though I wasn't completely blown away by the first novel, Article 5, I enjoyed it nonetheless and was eagerly awaiting the moment when I would be able to check the sequel out from the library. The only problem I had with Article 5, or one of the major problems I should say, was with the main character, Ember. To me, the protagonist is the most important aspect of a novel. Very rarely will I even contemplate reading a book when I know that the main character will be an annoying, sniveling mess. However, I had faith in Kristen's remarkable writing style, and decided that I would look on the bright side of things for once. The worse the character, the more development that can happen, right? I prayed and prayed to the book gods that Kristen would be able to build Ember's character to the point where I didn't have to cringe every other page from the downright stupidity of her actions.

Now onto the actual review. Ember. *Shakes head sadly* What are we going to do with you? I see what the author is trying to accomplish. Making Ember out to be this compassionate, benevolent hero who is willing to assist any helpless civilian, even if it means risking her own life in the process. And yes, when this sort of scene happens in other novels, I either A. Start tearing up and end up having to remind myself that this isn't really happening. Or B. Fist pump the air, because she or he was gutsy enough to do something that no one else had the courage to do. However, I never got the sense of soul wrenching sorrow or heartfelt pride whenever Ember did something defined as "heroic." I don't know if I'm being prejudice, because I disliked her so much in the first novel. Or because of another reason entirely.

She seemed to believe that her way of thinking was infallible. That if everything happened the way she wanted things to happen, nothing could possibly go awry. That everyone would hold hands and skip off to their own freaking happily ever after. The only attribute that I even remotely liked about her was that she wasn't afraid to fight back physically when necessary. If she didn't have this one tiny saving grace, I would've gave up on her before this novel even began.

The romance in Breaking Point gave me a "Meh" feeling. Surprisingly, I found the interactions between Chase and Ember in the previous novel to be more compelling and entertaining than that of it's sequel. Although I still liked Chase as a character in Breaking Point, I didn't really feel the connection Chase and Ember supposedly had. At least not as much as I felt in the first novel. It seemed like Chase's sole purpose was to protect Ember with his life, which is great and everything, but their relationship was still lacking that extra "oomph" I was looking for. Yeah, they kissed and came close to having sex. Whopee. Even after two whole novels, I still stand firmly with the belief that Ember will never be good enough to be with someone as loyal as Chase.

Loved the writing style. This was probably one of the main reasons I kept reading this series. I never had trouble understanding the point Kristen was trying to drive across and everything flowed nicely and evenly. She inserted flashbacks flawlessly, so that they blended into the script and actually corresponded with the story, rather than sticking random memories throughout the book as many authors do. Although it took me approximately a week to finish the whole book, it definitely wasn't because I found it lacking in the action department. Sadly, I've been slowing down on my reading and reviewing due to Regents and SAT Preps. *Gag*  Anyways, there was always something exciting going on, and I never stumbled on a dull moment, even though many of the supposed "Twists" were predictable.

Overall, Breaking Point had a lot of potential, but unfortunately, fell flat. The major, major problem I have with this whole series, is the hypocritical, impulsive protagonist. I did see a slight amount of character development as the novel progressed, but not nearly enough to satisfy me. The action was fast paced, and if I didn't have to worry about school the next day, I probably would've devoured it in one sitting. Will I be reading the last installment? Yes. I recommend Breaking Point to those who are drawn to the Dystopian genre and can stomach the ramblings of an annoying protagonist.