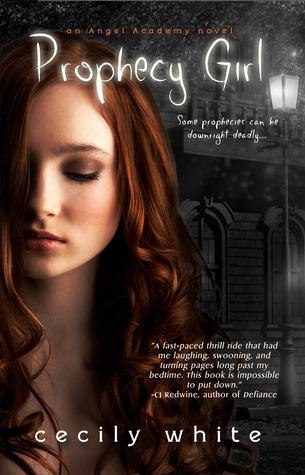 
Amelie Bennett. . . . Ending the world, one prophecy at a time.

I was born to slay Crossworld demons. Big black flappy ones, little green squirmy ones. Unfortunately, the only thing getting slain these days is my social life. With my high school under attack, combat classes intensifying, and Academy instructors dropping right and left, I can barely get my homework done, let alone score a bondmate before prom. Then he shows up. Jackson Smith-Hailey. Unspeakably hot, hopelessly unattainable, and dangerous in all the right ways. Sure, he’s my trainer. And okay, maybe he hates me. Doesn’t mean I’ll ignore the wicked Guardian chemistry between us. It’s crazy! Every time I’m with him, my powers explode. Awesome, right? Wrong. Now my teachers think I’m the murderous Graymason destined to bring down our whole race of angelbloods. Everyone in New Orleans is hunting me. The people I trusted want me dead. Jack and I have five days to solve the murders, prevent a vampire uprising, and thwart the pesky prophecy foretelling his death by my hand. Shouldn’t be too difficult. Getting it done without falling in love. . . that might take a miracle.

Feelings after reading this book? Perplexed. Confused. Flabbergasted. I could barely keep up with the story and some things just didn't make a lick of sense. Although the protagonist was strong at times and had a great sense of humor, she clearly lacked in the decision making department. She acted downright idiotic at times and was way too reckless for my tastes. As they say, there's a fine line between bravery and stupidity, and unfortunately, she crossed it more than once. I didn't mind (too much) her instant connection with Jackson, but her infatuation with him as the story progressed grated on my nerves. At every fork of the road, no matter if she was doing something as mundane as brushing her hair or running away from things that were trying to kill her, she always had Jackson on her mind, wondering if he approved of her actions or berating herself for acting like a complete fool in front of him. Which she did pretty often. The comedy was hilarious and actually induced a feel laughs from me now and then, however, there were some times I wished the protagonist would stop taking everything as a joke. I loved the idea and concept of the novel, I just wish it was better executed.