Whispers At Moonrise by C.C. Hunter 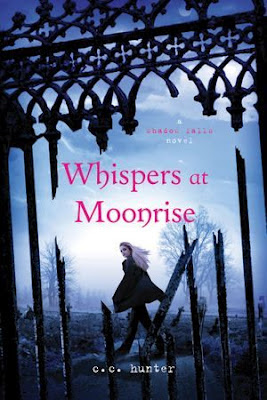 Shadow Falls Camp is back in session with the most explosive installment yet. A shocking new threat will rock Shadow Falls—changing it forever and altering Kylie’s journey in ways she never imagined.

Even at a camp for supernatural teens, Kylie Galen has never been normal. Not only can she see ghosts, but she doesn’t seem to belong to any one species—she exhibits traits from them all. As Kylie struggles to unlock the secrets of her identity, she begins to worry that Lucas will never be able to accept her for what she is, and what she isn’t…a werewolf. With his pack standing in their way, Kylie finds herself turning more and more to Derek, the only person in her life who’s willing to accept the impossible.

As if life isn’t hard enough, she starts getting visits from the ghost of Holiday, her closest confidante. Trouble is, Holiday isn’t dead…not yet anyway. Now Kylie must race to save one of her own from an unseen danger before it’s too late—all while trying to stop her relationship with Lucas from slipping away forever. In a world of constant confusion, there’s only one thing Kylie knows for sure. Change is inevitable and all things must come to an end…maybe even her time at Shadow Falls.

I have always enjoyed novels that had to do with some sort of paranormal school or camp, and when I first discovered Born At Midnight, (first book of the Shadow Falls series if you haven't read them) I couldn't wait to get my hands on it. After reading it, I was soon eager to find out more about Kylie's life and what type of paranormal she actually was. Luckily, the wait time for the second installment of this intriguing series was shorter then the usual time frame between novel releases, but it still had me chomping at the bit because of that jaw dropping cliff hanger!

Whispers At Moonrise, is the type of book that you can read in one sitting. Although it wasn't one of my swoon worthy favorites, I still loved every second of it! C.C. Hunter has that type of writing style that leaves off at what I can only describe as a cliff hanger after each chapter, that gives you that "What the heck happens next." feeling. Because of that, I was not able to put the book down even if my life depended on it! (Might be a exaggeration, but still. :P) C.C. also has a funny sense of humor that she incorporates into all of her characters, and even though it didn't have me laughing out loud like I did in Julie Kagawa's Iron King, it still had me smiling then and there.

Kylie, is a super super strong character in this novel, much like she was in the last few books. She has parent problems, like alot of teens. Her mom and dad have gone there seperate ways but she still hangs onto the hope that one day they will get back together again and everything will be right in the world. I feel that teens that have problems going on at home can really connect with her through that. Kylie has a unfair load of responsibility dumped on her shoulders that no teen should have to carry alone. Examples? Talking to the dead and dealing with rouge vamps who are out to either use her or kill her. Neither has a good outcome. Adding to that, Kylie has never felt like she really belonged to any part of Shadow Falls.

In the last book Taken At Dusk, Kylie's dad reveals that she's a chameleon. Her first thought? A supernatural lizard. As the story progresses, Kylie discovers who she really is and slowly learns about all of the new powers that she's attaining. Her up to no good sidekicks include Della, a snarky vampire who has a tendency to have a pissy but hilarious attiude and Miranda a dyslexic witch who loves getting into arguments with her. Della was actually one of my favorite characters! Even though she pretends to be unaffected and indifferent, you can see that she really cherishes and values her friendship between Kylie and Miranda and would protect them at any cost. Miranda, in my opinion is more the insecure one and acts lovesick throughout the novel, but also would do anything for both her best friends.

The romance was one of those well known and dreaded by some, love triangles. To be honest, I wasn't to crazy about either boys in this novel. No team Derek or Team Lucas for me! Which is kind of depressing because I really love a good love triangle. I was Team Lucas all the way in the last three novels but ehhh I don't know if it's my mood or something completely different, but I really wasn't to crazy about him in this one. It seemed like every time I thought "Oh Kylie's definitely going to pick him" or "No way she'd ever pick him", I was wrong. She bounced back and forth between both boys so much it had my head spinning. Overall, both boys have made mistakes and hurt Kylie in some way or another but the choice is still unclear on who she's going to pick.

The action was pretty well paced. One of the things that I loved about this novel was that the author took the time to actually jog your memory a bit. I mean after six months of reading other books, all of the characters and plots of different books sometimes get jumbled up in your head. C.C. Hunter gave just the right amount of background story to remind me of the important characters and yet she didn't give to much information either. She also added some morales to the story as well, like not letting life pass you by and taking chances even when there might be consequences. YOLO! xD

Full of steamy romance, action, teenage angst, and life changing discoveries, Whispers At Moonrise will have you flipping page after page, eager for more!

The final book in this explosive saga, Chosen at Nightfall, will be released in Spring 2013!

Click to Watch Book Trailer
Posted by Daphne at 12:44 AM