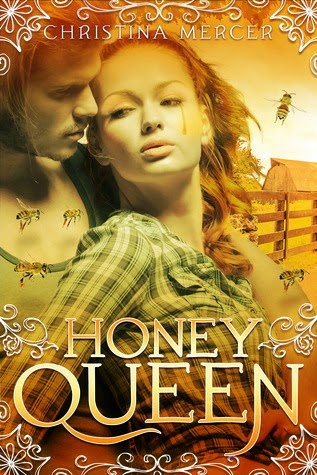 Love is honey sweet, but it comes with a fatal sting . . .

Melaina Maris needs wings to fly the gap between loving Sam and her family’s ancient curse that forces carnal love and then kills the male lovers. She won’t let the same fate that killed her father befall another. She refuses to allow her goddess-created bloodline to continue. But there’s no easy way out, especially after the curse turns her into the Honey Queen—savior to honey bees—intensifying her charms.

To help her fulfill the curse’s demands in the least harmful way, her grandmother takes her to mate with terminally ill Boyd. But Boyd’s gay. And an expert in mythology. Instead of having sex, Melaina learns how she might summon the goddess who created the first ancestor bee-charmer and cursed her bloodline. Melaina's magic—tears to save honey bees from endangerment—could be enough to persuade the goddess to end the curse. But an unexpected discovery soon changes that hope, spinning Melaina into a swarm of love, friendship and death.

My Review:
When I first read the synopsis, I was skeptical. Honey bees? Honey Queen? Authors really have to dig deep now to find any YA ideas that haven't already been bled dry. To be honest, I found the idea laughable at first, kind of like the theme of Hungry by Swain, though admittedly not to that extent. Who's ready to get hungry?  However, there was also a part of me that was intrigued, so I decided to give it a try.

Melaina's power over bees stems in Greek Mythology, from a goddess named Aera whose domain lies over honey bees and virginity. In order to shirk her duties as a goddess, Aera created a line of female descendants whose main purpose in life was to tend her honey bees and live out a life of chastity. However, things go awry when the first of her line falls in love with a demigod. They have a daughter, but not without consequences. Angered by the act of love, Aera curses the family. From that day on, the mothers are cursed to have carnal urges for men until they get pregnant and continue the long line of daughters. To make matters worse, the men fall ill soon after and die as soon as the baby is born.

Aera always needs someone to care for her honeybees. For Melaina, that isn't a problem, since it's her passion in life, as it was for her mother, grandmother, and so on. However, another downside of the curse is that if she leaves the honey bees for a long period of time, she eventually withers and dies. Uplifting, isn't it?

One time, she sees a really hot guy and tries to restrain herself. But then, she thinks, You know what? I can prove to this goddess bitch that I'm above this curse. I'll just kiss him..just a little bit. Then I'll back off, I promise. *Insert eye roll* Like that's gonna happen. You already know that you're raging hormonal, yet you decide to tempt fate anyways?

The romance wasn't much of a romance. There were some flashbacks of when Melaina and Sam were kids, but that wasn't enough for me to want them to be together. If there were more, perhaps I would've understood their friendship better. The lust curse hit Melaina pretty early into the story, so the conversations between Melaina and Sam consisted of more making out than anything. When they weren't making out, Sam was knocking on the door or basically stalking her, trying to get her to talk to him, which eventually led to more of the aforementioned making out. The depth in their relationship was nonexistent.

Overall, Honey Queen was a superficial story. Things were happening on the surface, but they all felt fake and unreal. I can't even explain it. I give props to the author for the honey bee theme though. It's definitely a breath of fresh air, and Greek mythology is always a good thing. The writing wasn't bad, but the explanations were confusing at times. Perhaps this just wasn't my cup of tea.