The Kiss of Deception by Mary Pearson 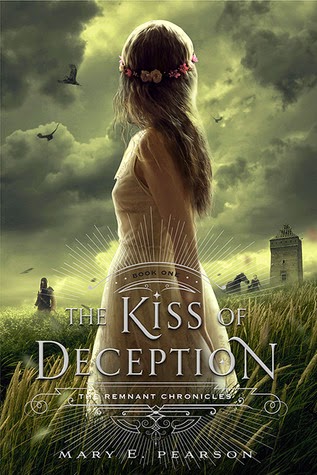 The Remnant Chronicles:
Book One: The Kiss of Deception
Book Two: The Heart of Betrayal
Book Three: Unknown

A princess must find her place in a reborn world.
She flees on her wedding day.
She steals ancient documents from the Chancellor's secret collection.
She is pursued by bounty hunters sent by her own father.
She is Princess Lia, seventeen, First Daughter of the House of Morrighan.

The Kingdom of Morrighan is steeped in tradition and the stories of a bygone world, but some traditions Lia can't abide. Like having to marry someone she's never met to secure a political alliance.

Fed up and ready for a new life, Lia flees to a distant village on the morning of her wedding. She settles in among the common folk, intrigued when two mysterious and handsome strangers arrive—and unaware that one is the jilted prince and the other an assassin sent to kill her. Deceptions swirl and Lia finds herself on the brink of unlocking perilous secrets—secrets that may unravel her world—even as she feels herself falling in love

DNF at Pg. 336
Because of this, my review only reflects the portion that I read.

The pacing is so unbearably slow. The whole book, at least to the point I read, basically just revolved around her everyday life. Great. You Work. And pick berries. HURRAH! The setting and the theme were both intriguing, which is why I was pretty interested in the beginning of the novel, but it went straight downhill from there. Most things weren't explained well, if they were explained at all. The book itself had more unrealistic happenings than realistic ones. I found it hard to believe how easy it was for the freaking First Daughter to escape so easy. And after she escaped, only 3 people were able to find her? Everyone goes on and on about her skills in tracking and covering her tracks, but I highly doubt it. From the way she described her getaway, concealing her path was the last thing on her mind. Screaming at the top of your lungs? Yep, that's not telling at all.

Another thing I was irritated by was her utter lack of concern for her kingdom. Yes, she's been shaped and molded and told what to do and ignored her whole life, but even if she's had that sort of childhood, wouldn't it be decent for her to at least consider the needs of her people over her own desires and dreams? People are dying, and all she cares about is finding her one true love. Which of course brings us to the love triangle. To be honest, I spent the entire first half of the story believing Rafe was Kaden and Kaden was Rafe. So either Pearson's writing was weird or I'm terribly unobservant. I mean, in my defense, their POV titles were The Assassin and The Prince. When Lia actually crossed paths with them, the way they acted made me automatically assume that Rafe was the assassin and Kaden was the prince. Imagine my surprise when the POVs switched near the end to Rafe and Kaden instead of The Prince and The Assassin. As I said, the fault probably lies solely on me, but this has never happened to me before, so I don't even know anymore. Either way, both boys were blah to me. Insta-love connection kills my happiness. That's all I have to say to that.

Update: I finally understand that the POV names were The Assassin and The Prince for a reason and that the author wanted us to be almost as much in the dark about the characters' identities as Lia. Hitting myself at the moment, because of how slow I feel. I give props to the author for introducing the characters in such an innovative fashion; however, I still don't think it was executed well. It would've been mind-blowing if Pearson dropped tiny clues here and there about their true identities so that in the end I could've had one of those Aha! moments. But I really didn't feel it, at least for the portion I read. Maybe things were explained out better at the end?