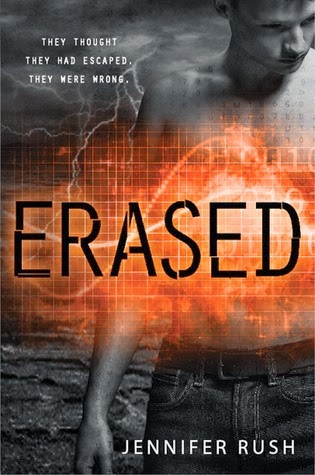 They thought they had escaped. They were wrong.

After fleeing the Branch with Sam, Cas, and Nick, Anna is trying to make sense of the memories resurfacing from her old life. At the same time, she's learning how to survive in hiding, following Sam's rules: Don't draw attention to yourself. Always carry a weapon. Know your surroundings. Watch your back.

Then a figure from Anna's childhood reappears. Is it a Branch setup, or could it be the reunion Anna has hoped for? Uncertain of where her loyalties lie, Anna must fight to learn the truth -- before she is betrayed again. Ultimately, the answers hinge on one question: What was the real reason her memories were erased?

Jennifer Rush delivers a thrilling sequel to Altered in a novel packed with mysteries, lies, and surprises that are sure to keep readers guessing until the last age is turned

Good, but not great.

Erased was disappointing, especially when compared to Altered. The content wasn't boring by any means, but I definitely didn't find it as entertaining or thrilling as I found the happenings in Altered. The plot, to me, wasn't much of a plot at all. It's hard to put in words.

At times, I thought Anna was a capable heroine. Despite her lack of training when compared to the boys', she could hold her own in battle. She made the best of what she had, and for that, I respected her. No damsel in distress shenanigans here. Although, she did get herself in a pickle more than a few times. My point is, she tried to defend herself rather than rely on the boys to always take care of her. However, that's not to say that she didn't have her TSTL moments. She jumped head-first into danger multiple times, heedless of the safety of her and those around her. I understand her motives, but I wish she thought of some stealthier way of doing it, using her intelligence instead of relying on brute force to save her. Physical strength is definitely a great thing for a heroine to have; however mental finesse is just as important, perhaps even more so. Another thing that I found quite disturbing was her reaction to traumatizing events. Can't go much deeper than that without giving away spoilers. However, if you've already read the book, feel free to read my rant. :D

When Anna killed Dani, I was like...."What?" To be honest, it didn't even sink in until I got through the next few pages, because it was so shocking. Even though Dani did some unsavory things, she did all of those things for one purpose only. To protect her little sister. And what does Anna do? Stab her in the chest. GAH! WHAT IS WRONG WITH YOU? If she had to rough her sister up a bit to get to the boys, ok, whatever. But to kill her? Couldn't you just have, I don't know, knocked her out or something? Luckily, I wasn't too attached to Dani, because I hadn't really known her very well..but still. Anna basically killed her entire family, with little remorse. She was saddened and shellshocked for a short period of time, but not long after, she seemed as good as new. Creepy, much?

The other guys were cool. However, I am a bit wary of how this love triangle is going to pan out. Not much of it in Erased, but I'm guessing it'll be one of the main focus points in the last novel. As for the characters, Cas is my favorite of them all. He always brightens the atmosphere with his witty banter and brings much needed humor into dark situations.

The action didn't have me clinging to the edge of my seat. It was enough to keep me interested, but not enough to capture my full, undivided attention.

In conclusion, Erased was so-so. Although Anna was a strong protagonist at times, I still questioned her actions and reactions to certain situations. Sometimes I felt like her emotions drove her to make reckless decisions while at other times I felt like she didn't show emotion enough. The boys were interesting to read about, but I wasn't dying to know more about them. Will I be reading the sequel? Probably. Just won't be as excited to read it.

Email ThisBlogThis!Share to TwitterShare to FacebookShare to Pinterest
Labels: 2014 Release, Sci Fi, Three and a Half Stars, Young Adult