“I shouldn’t get involved.” 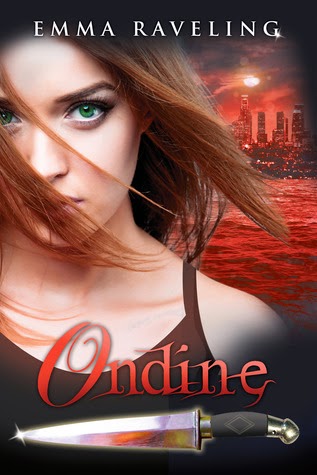 Rebellious and headstrong, sixteen-year-old Kendra Irisavie doesn’t have much respect for authority. An ondine with the powerful gift of Virtue, she uses her tough attitude and Empath magic to navigate through high school and keep others away.

Because being an ondine also means keeping secrets.

Kendra and her mother are Rogue water elementals in the middle of an ancient war. They hide among humans, their survival constantly threatened by monstrous Aquidae demons.

Along with a rigorous training regimen to mold Kendra into a lethal fighter, her mother has instituted four rules to keep her safe.

Trust no one. Relationships are weaknesses. Emotional attachments are dangerous. Be responsible only for yourself.

But when Kendra witnesses a classmate in trouble, she intervenes and her decision to break the rules comes at a price.

Sometimes, humans could be more dangerous than demons.

I’m a fantasy writer who lives a slightly eccentric life with my accommodating husband and our charming, neurotic dog. I'm currently working on the Ondine Quartet, a young adult urban fantasy/paranormal series featuring a kick-ass heroine, powerful magic, and the complex world of water elementals.

I have a weird love of spreadsheets and organizational tools because they give me the illusion that I am somehow in control of the chaos that is my life. I adore beautiful art such as painting and sculpture, classical music, lyrical writing, and great graphic design. My all-time favorite books (as of this writing) are Immortality by Milan Kundera, 100 Years of Solitude by Gabriel Garcia Marquez, Beloved by Toni Morrison, The Great Gatsby by F. Scott Fitzgerald, and The Metamorphosis by Franz Kafka.

Afternoon sunlight drenched the wood, heat seeping through my jeans and warming the back of my legs.

Rui’s icy voice sliced through the delicate spring air. “I need you to get the money from him.”

Potheads occupied the narrow recess beside the stairs while the cheerleaders and athletes took the table farthest from the building door.

They weren’t getting involved.
Neither was the Student Council group gathered along the west side.

I’d managed to follow her rules for the four months we’d been in L.A. The championship tournament was in two hours and she’d be seriously pissed if my performance wasn’t better than the last one.

I needed to concentrate on my own shit, not get involved in anyone else’s.
Troy’s fear ratcheted up another notch and the hot spike of emotion raked against my insides.

“I—I don’t know him that w-well…”
“That’s a problem.” Rui adopted an expression of mock concern and pulled out a cigarette. “‘Cause your dad owes mine a lot of money.”
Empath magic reached inside him, sensing clumps of frustration and rage, hardened over the years.
“It’s just me and my mom,” Troy said in a desperate voice. “I don’t see him that often —“
Mistake one.
“Often?” Rui’s voice rumbled with the dark glee of a predator who’d spotted its prey. “So you do see him.”
“N..no.” Troy’s eyes darted around the courtyard.
Don’t, don’t…
Wide eyes locked on to me. Great.
“What do you mean, no?”
“I m-m-mean…” He stumbled over the words. “S-sometimes I do, but…”
Mistake two.
“Then you can get the money from him, right?” Rui lit his cigarette. Troy flinched at the click of the lighter. “I don’t think your old man would like it if my father got his hands on you.”
Troy swallowed, his gaze flickering toward me again.
Sasha followed his line of sight. “You thinkin’ a chick’s gonna help you?”
Rui slowly turned. Black hair, dark eyes set against olive skin. Cold, grim awareness etched into his face, creating an impression of severe superiority.
The things he’d seen and experienced exceeded your worst nightmares and he wanted you to know it.
Rui flicked his cigarette, ash landing a foot away from me.
“She’s not bad, Troy. Don’t think she’s your type, though.”
I suppressed a sigh and stood. Might as well get this over with.
“You don’t know my type, Vergara.”
A flicker of surprise in those dead eyes. “You know my name. I’m flattered.”
“Don’t be.” I strode over and leaned against the metal railing of the stairs. “You just have a rep of being an asshole.”
Kane stepped forward, body tense. Rui’s arm shot out and stopped him.
“You’re that junior.” A ring of smoke gently swirled around his face. “Transferred here a few months ago. Kendra, right?”
Empath detected a quick shift. Irritation and anger smoothly transformed to calculating curiosity. The unusual degree of control set off my internal alarms.

I shouldn’t underestimate him.