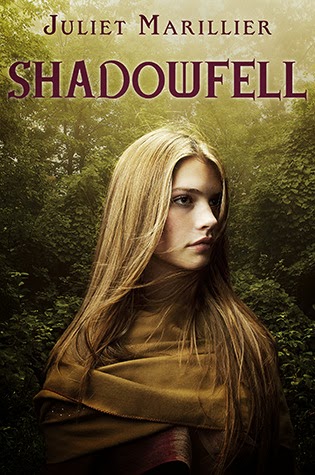 Goodreads Synopsis:
Sixteen-year-old Neryn is alone in the land of Alban, where the oppressive king has ordered anyone with magical strengths captured and brought before him. Eager to hide her own canny skill--a uniquely powerful ability to communicate with the fairy-like Good Folk--Neryn sets out for the legendary Shadowfell, a home and training ground for a secret rebel group determined to overthrow the evil King Keldec.

During her dangerous journey, she receives aid from the Good Folk, who tell her she must pass a series of tests in order to recognize her full potential. She also finds help from a handsome young man, Flint, who rescues her from certain death--but whose motives in doing so remain unclear. Neryn struggles to trust her only allies. They both hint that she alone may be the key to Alban's release from Keldec's rule. Homeless, unsure of who to trust, and trapped in an empire determined to crush her, Neryn must make it to Shadowfell not only to save herself, but to save Alban.

My Review:
Started out strong, but failed to keep hold of my attention. Basically, 90% of the novel involved walking from one place to another. Running away from something life-threatening was considered an action scene. *Gasp* The protagonist, Neryn, was the type of strong, courageous lead I expected after reading the synopsis, but.....I couldn't seem to connect with her. On paper, she was my ideal heroine, yet in my head, she felt two dimensional and hollow. Intelligence wise, I'm proud to say that she doesn't suffer from TSTL (Too Stupid To Live) syndrome. Instead of letting a pair of dreamy eyes lower her inhibitions, she remained cautious and always inspected the evidence first, thinking logically instead of emotionally. The world building was really well done. I loved the different descriptions of the fey and the accents certain characters had. On the other hand, the plot was unoriginal.

Evil king terrorizing the kingdom in his quest for power? Check.
Protagonist with bad-ass skills who's destined to save the world? Check.

Nothing new there. Although Shadowfell had decent world-building and a capable, but admittedly lacking, female lead, it didn't satisfy me. Throughout the book, I found myself skimming the pages, out of my mind with boredom. Honestly, I'm surprised I even had the tenacity to finish it. Won't be reading the sequel.

Email ThisBlogThis!Share to TwitterShare to FacebookShare to Pinterest
Labels: 2012 Release, Fantasy, Magic, Two and a Half Stars, Young Adult