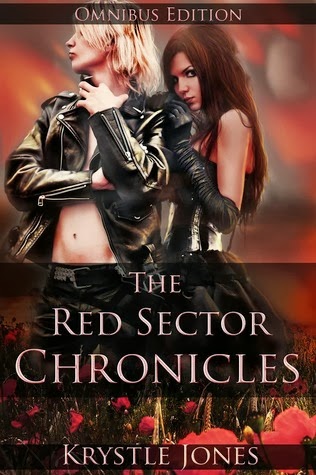 The strength of Sloane’s heart is about to be put to the ultimate test.

After the Eclipse – the night vampires began openly slaughtering human victims – everything changed. Out of fear, the government salvaged what remained of the human population and enclosed them in massive, security-laden cities called White Sectors, while marking the vampire infested territory as Red Sectors.

When seventeen-year-old Sloane McAllister’s twin brother disappears, she seems to be the only one who thinks he isn’t dead, and she vows to stop at nothing to find him. Gathering her courage, she braves the Red Sector to search for clues to his whereabouts. By chance, she encounters Aden, a handsome, charismatic vampire with a hidden agenda. He turns Sloane against her will and whisks her away to his underground city. Enemies quickly become friends as Sloane struggles against her attraction to Aden, and resists her growing loyalties to the creatures that ruined her life.

But the vampires themselves are the least of her problems. A war is brewing between the humans and vampires, along with a growing web of deceit and betrayal. And before it’s all over, loyalties will be tested, hearts will be broken, and no one’s lives will ever be the same.

Krystle Jones was born and raised in the small, southern town of Tullahoma, Tennessee. Reading and writing have been lifelong passions of hers. In addition to being a novelist, she is also an award-winning flutist, and moonlights as a voice actress. Her voice can be heard in the popular online game, Alice is Dead 3.

Today, Krystle Jones, author of the young adult dystopian/PNR series The Red Sector Chronicles, will be interviewing her main character, Sloane McAllister!
KRYSTLE: So, Sloane, tell the readers a little about yourself.
SLOANE: Um… *tucks hair behind ear and stares at the floor* I’m, uh, a vampire hunter who kind of became a vampire. *laughs* Yeah, EPIC fail.
KRYSTLE: *grins* How’s that working out for you?
SLOANE: Well, you know, it was a big adjustment at first. And by big adjustment, I mean I totally freaking hated it! *laughs* But you get used to it, and being a vampire isn’t all bad. *looks at handsome blond vampire off-stage*
ADEN: (shouted) Yeah, it isn’t!
SLOANE: Get out of my interview!
KRYSTLE: Aden, darling, you’ll get your turn in a minute.
ADEN: *sad face*
SLOANE: *sighs* Why does he have to look so cute when he’s sad?
KRYSTLE: Anyway, back to the vampire thing. How did you feel when you first went into the Red Sector to look for your brother?
SLOANE: Scared to death! Duh! I mean, the Red Sectors are crazy dangerous. All those vampires… *shudders*
KRYSTLE: And yet you went anyway.
SLOANE: *glares at author* And whose fault is that?
KRYSTLE: *grins* I think you relish being in danger, a bit of a thrill-seeker, as it were. Not to mention you’re stubborn and reckless.
SLOANE: Hey! Those are my finer qualities. And I wouldn’t have had to be in dangerous situations if you hadn’t kept putting me in them.
KRYSTLE: You know you liked it.
SLOANE: *suppresses a smile*
KRYSTLE: Right. Well, thanks for coming today, Sloane! Good luck staying out of trouble. You’re going to need it. *last part grumbled*
SLOANE: I heard that! Vampire hearing, remember! *points to ears*