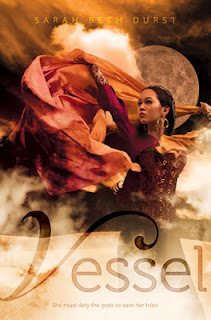 
In a desert world of sandstorms and sand-wolves, a teen girl must defy the gods to save her tribe in this mystical, atmospheric tale from the author of Drink, Slay, Love.
Liyana has trained her entire life to be the vessel of a goddess. The goddess will inhabit Liyana’s body and use magic to bring rain to the desert. But Liyana’s goddess never comes. Abandoned by her angry tribe, Liyana expects to die in the desert. Until a boy walks out of the dust in search of her.   Korbyn is a god inside his vessel, and a trickster god at that. He tells Liyana that five other gods are missing, and they set off across the desert in search of the other vessels. For the desert tribes cannot survive without the magic of their gods. But the journey is dangerous, even with a god’s help. And not everyone is willing to believe the trickster god’s tale.   The closer she grows to Korbyn, the less Liyana wants to disappear to make way for her goddess. But she has no choice: She must die for her tribe to live. Unless a trickster god can help her to trick fate—or a human girl can muster some magic of her own.

If I had to pick two words to sum up all of Vessel, it would be unique and thought-provoking. I have never before...in my life ever encountered a book about ancient desert gods and goddesses! I've read tons of Greek Mythology related books this year and even though I still absolutely positively adore the well known gods such as  Poseidon, Zeus, and Hades, I was in the mood for something refreshing and different to read. My wish came true! I'm ashamed to admit that when I picked up Vessel, I had no idea what it was about at all. As soon as I saw the cover I had a major case of fangirling and squealing (Don't judge me, you know you do it too! xD).  Instead of the usual YA covers, with emotionless girls or dark and broody guys looking off into the distance, Vessel's cover is intriguing with a dancing Indian girl dressed in traditional garb! This has got to be the second prettiest cover I have ever seen this year, only second to Yelena Black's Dance of Shadows.

Now that I've finished gushing over the cover, let's move onto the actual book xD! Liyana was born to die. And no, not get old, have a dozen grandbabies, then die peacefully. She was chosen to sacrifice her life and let Bayla, her clan's goddess use her body and perform miracles to ensure her clan's survival for another hundred years. Just like that, her whole life was mapped out for her. She spent her entire life preparing for this one moment, and when the night came to summon her goddess, she danced until dawn while her magician sang the chanting words over and over again. The problem? Bayla never came.

There were many different factors that I both loved and disliked about this novel. For one thing, Liyana was a character that I admired but also got annoyed at sometimes. I loved that she was selfless and willing to die in order to save her clan's people, especially her little brother Jidali who I fell in love with right away. He was just so incredibly adorable! She was also strong, brave, and fought for survival when other people would have just given up. However, sometimes she made idiotic decisions that could have been avoided.

Korbyn, the trickster god was amusing and even though he wasn't a outstanding character, I still admired his courage. For some reason I expected the gods and goddesses to be more powerful then how they were portrayed in the novel. Maybe it's just because I'm so used to the Greek gods, but it seemed like the desert gods passed out fairly quickly even when they didn't do much. The other vessels in this novel all had different personalities. Most of them I didn't like in the beginning but as the story progressed, I came to understand them and how they thought.

Unlike most YA novels, this story didn't focus to much on the romance, which is an idea that is nearly extinct. The parts of the romance that I did read were a little confusing but I did love the relationship between the two main characters. It started off slow and progressed into something sweet and pretty but then the author just ruined it. I felt like What the heck just happened!!?? I can't go in depth because I don't want to include spoilers but just....so....not.....cool.

The greatest part of this novel was the worldbuilding and the story behind it all. I was fascinated by how the author described the culture of all of the desert people and the stories behind the gods and goddesses. Although there were quite the amount of fables on how everything came to be, I was never bored for the slightest second!

If you enjoy selfless heroines, never before seen Desert Mythology, and one truly captivating setting, then Vessel is definitely the book for you!