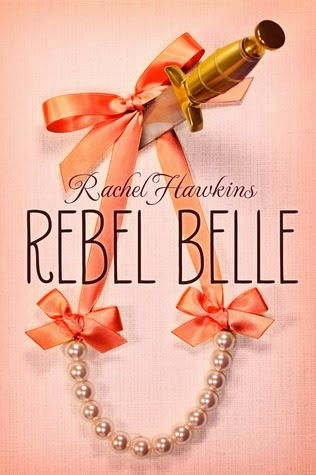 Harper Price, peerless Southern belle, was born ready for a Homecoming tiara. But after a strange run-in at the dance imbues her with incredible abilities, Harper's destiny takes a turn for the seriously weird. She becomes a Paladin, one of an ancient line of guardians with agility, super strength and lethal fighting instincts.

Just when life can't get any more disastrously crazy, Harper finds out who she's charged to protect: David Stark, school reporter, subject of a mysterious prophecy and possibly Harper's least favorite person. But things get complicated when Harper starts falling for him--and discovers that David's own fate could very well be to destroy Earth.

With snappy banter, cotillion dresses, non-stop action and a touch of magic, this new young adult series from bestseller Rachel Hawkins is going to make y'all beg for more.

Rebel Belle was like a refreshing glass of sweet tea on a hot summer day.

There should definitely be more novels out there like this, both tone wise and content wise. Rebel Belle was light and fluffy, but it still retained that kick-ass, grittier edge that I'm always after. Content wise, I believe that this is the first novel I've ever read focused on paladins. What do I know, there might be millions of paladin books out there that I'm oblivious to, but through my experiences, I haven't seen many of them, besides maybe The Paladin Prophecy, which I have yet to read.

Rebel Belle was pretty much an equal blend of anything you could ever want in a novel: strong characters, humor, action, romance, and a unique theme. Rachel also has a flowing, hilarious, image provoking writing style that draws you right in! I felt like I was actually in the novel experiencing the emotions that Harper felt. Especially so in the beginning, when David Stark pulled off that huge stunt, which I'm not going to give away for the sake of keeping this a spoiler free review. The aggravation and indignation I felt made me want to hit my head against a wall amongst other things harmful towards my outwardly appearance of sanity.

The romance between Harper and David was slowly and steadily developed as well. They didn't immediately fall in love after discovering how much their lives were really connected. On the contrary, they seemed to despise each other even more. It was the little things, the little gestures and conversations, that eventually led them to deeper, realistic (Key Word REALISTIC) feelings. However, I am a bit ticked off at how Harper treated Ryan whilst this was all going down. Actually, the way she treated all her friends irritated me endlessly. While I understand the choices she made, I really wish she would've stopped dragging a relationship that would never see the light of day again. Every time she ditched Ryan or forgot to call Bee made me want to cover my face in horror.

Other then that, I liked Harper. I have no doubt that some people are going to rip on her because they believe she accepted the supernatural events that occurred too quickly, but I still thought it was believable. People face traumatic and shocking situations in different ways, and Harper's way involved colliding head first with her issues, using sarcasm and wit as her main defenses. Kind of like Percy Jackson now that I think of it. It was her personality that inclined her to react the way she did, not desire to get the storyline moving on the author's part. While her life was crashing down around her, the life she had worked so hard for, she remained strong. I admit I was a bit skeptical of how her character would play out in the beginning. Bluntly stated, I thought she was snobby and superficial. But throughout trying times, she showed her true colors and redeemed herself completely by the end.

Heroine- 4/5
Romance- 5/5
Cute and adorable. Realistic in the fullest!